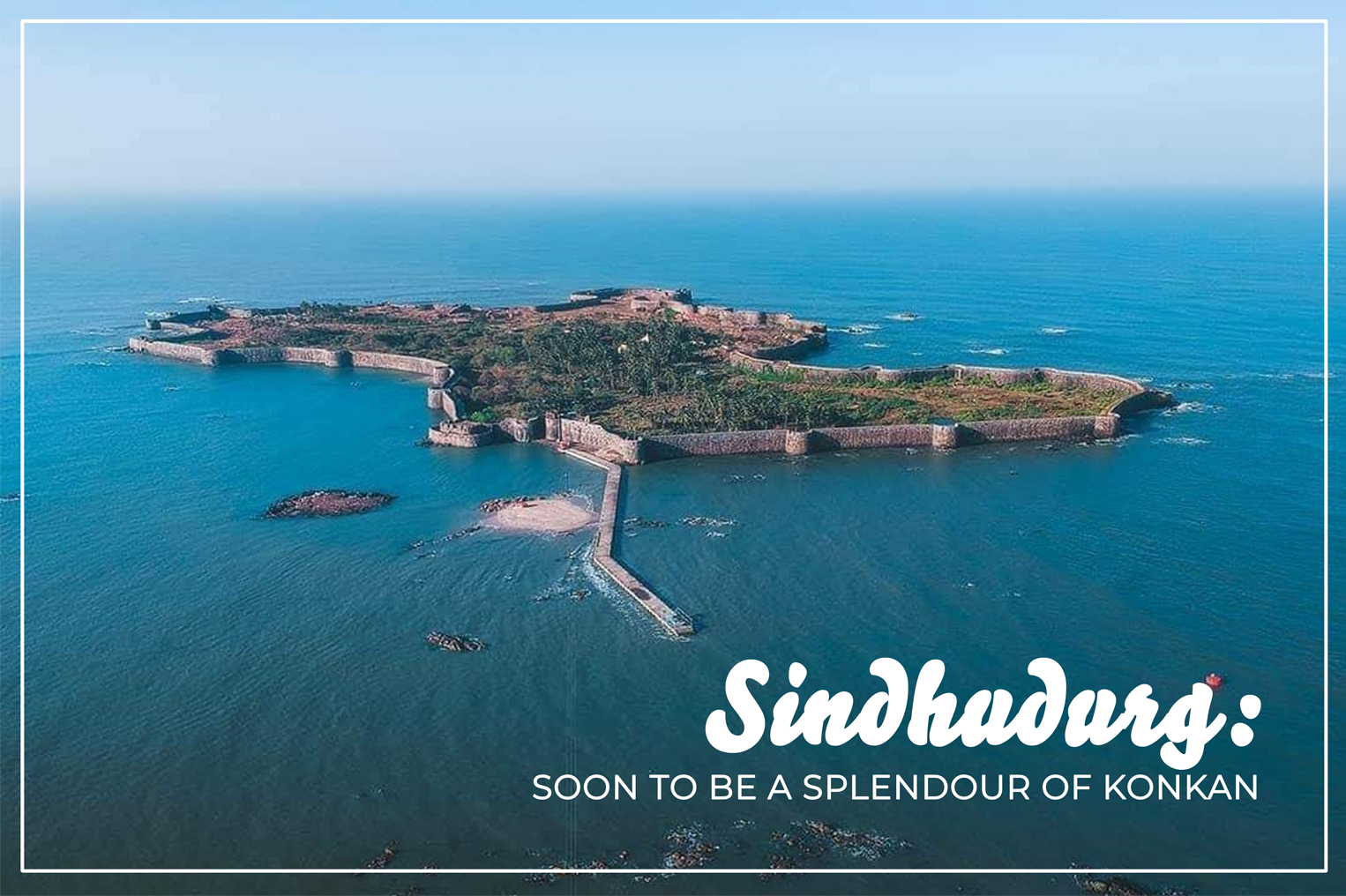 Sindhudurg, one of the popular districts Maharashtra, is a hotspot for development. Back in time, Sindhudurg was separated from the Ratnagiri District, and today is spread over 5,207 sq.km, hosting more than 8.5 lakh people as per 2011 census. Over the years, Sindhudurg has seen an increase in development, and this has been a big achievement for a district which was one the least populated in the state.

The land of mangoes and the most-popular sea food in the Malvan belt has already won hearts of many in the nearby states. Cities here are known for its pristine and untouched beaches, Sindhudurg has a lot to offer, be it forts such as Sindhudurg Fort in Malvan, Vijaydurg Fort Devgad, Vithoba fort or RediGanpati temples, waterfalls in Dodamarg or scuba diving at Tarkarli. Another hidden gem that this place has is Amboli Hill Station in Sawantwadi. It is situated at an altitude of 690 meters and is completely serene.

People have been looking for new unexplored destination and Sindhudurg fits the bill in this regards. There is so much that this land already has to offer and it is an absolute treat to be especially during monsoon. The natural greenery all around, the waterfalls bursting with vigour, the thick dark clouds in the sky are surely going to lift your mood and give your holiday the touch it needed. It is also a great place to enjoy the king of fruits – Alphonso Mango.

For many years now, the government has been planning new tourism development opportunities in this district, but the current Tourism Minister, Aditya Thackeray, has taken this a few steps ahead. Reports published in the media state that once the current plans are implemented, the government expects Sindhudurg to become one of the must-visit places in India.

Last year, in August, the tourism department in Maharashtra signed a deal with Taj Group’s chain of luxury hotels, with an aim to operate in Sindhudurg. This decision was taken to boost international tourism in Maharashtra.

To kickstart the same, memorandums of understanding (MoU) were and it is said that in the next 3 years, Shiroda will have a Taj Hotel that will be fully operational.Another similar project has been planned at Tadoba National Park near Chandrapur, whereby ThrivingHotel Group has been given the responsibility for a few star hotels in the next three years.

In June 2020, the government cleared a proposal and allotted over 54-hectare land at Shiroda for this five-star facility, and the land has been given on a 90-year lease.

The focus for the current government, in the next few years, is to make sure Maharashtra shines on the tourism map of India. This is further said to generate employment opportunities and revenue for the state. As per media reports, these hotels are expected to bring over INR 125 crore worth of investment and with these schemes and plans in place, the focus is to the district gets a boost with the tourism sector further contributing to state’s GDP.

A large part of India is covered in beaches, but despite that, Goa seems to be on the top of the list when it comes to beach travelling. Experts state that the government has learned about such opportunities and now aims to develop similar experience in Maharashtra.

In early 2020, the government has also drafted the beach tourism plan and aims to kickstart the same with eight beaches across Maharashtra, of which two are from Sindhudurg. As per reports released in January 2020, Kunkeshwar and Tarkarli beaches in Sindhudurg will soon have Goa-styled beach shacks. Officials, back then, had announced that these shacks will be operational for 12 hours in a day, from 7 am to 7 pm, and will be equipped with CCTV cameras for safety reasons.

To boost the same, a "beach shack" policy was drafted and approved for the benefit of promoting tourism on the Konkan coast.To strengthen the plan and with a focus to make it easy for the citizens, officials had decided that these shacks would be available on a deal for three years, at an affordable cost. Moreover, 80 per cent of jobs generated from these would have to be given to the locals.

Reaching Sindhudurg is never a challenge as it is well connected by road and rail. There is also an upcoming airport at MOPA that will make commuting to Sindhudurg via air easier. In addition to this, there is also a Chipi airport that is Sindhudurg and expected to give a big fillip to tourism in this area.

It is a landmark project that is expected to boost the development in Sindhudurg. Chipi- Parule airport was expected to be operational in early 2021, but has now been delayed. Officials believed that the proposed Chipi- Parule Airport will bring newer opportunities for the state and offer unforgettable experiences to beaches, scenic locations, and other attractions in the district.

This airport is currently is being built at a cost of INR 520 crore. As per the proposal, it will have a 2,500 metres runway and has a terminal that can accommodate approximately 400 passengers.

Based on the approvals received by the Ministry of Civil Aviation, Air India’s subsidiary airlines will be operational from Sindhudurg under the UDAN scheme. Once operational it will give tremendous boost to the projects in the area and enhance their viability. The development of these airports will help the region to attract more tourists, which in turn will help in developing the area further.

Even the rail and road connectivity is set to improve for the area in the coming days. There is a new railway line in works that will be connecting Sawantwadi Station to the Redi Port. This line is already in advanced stage of development and is expected to be completed soon. In addition to this, there is a four lane coastal road project that is in works. The project will connectRedi Port to the State Highway.

Here are a few other road development work in the pipeline

The coastal highway is expected to open up undiscovered areas of the Konkan region to tourists driving to Goa from Mumbai. Currently, the government is converting this into a 4 lane highway from the existing 2. After all four lanes are function the travel time to Dapoli will be just1 hour.

The MahaVikasAghadi government’s is mulling a greenfield six-lane Konkan expressway parallel to the Goa highway. The government has earmarked Rs25,000-crore for this 6-lane coastal road. It would provide a scenic drive through the Konkan belt and also help ease the traffic congestion on the route.

Dodamarg is connected to Karnataka via this state of the art national highway. Belgaum has always been at the forefront of industrial development and it will continue to be so in the times to come. There are many upcoming projects in the area that are expected to complete soon. Not just in terms of development but there is a great tourism opportunity for this area. For any nature lover, Tillari (Tilari) Dam is a must visit spot. The dam and the adjoining lake is a great tourism spot and many people visit it.

Apart from Chipi-parule Airport, Dodamarg, The Sub District of Sindhudurg is surrounded by 3 more airports,

Belgaum Airport – 75 km from Sindhudurg as one of the Karnataka’s oldest airport was used as a training site for World War 2. The commercial flights resumed at this airport in 2003. In the past few years, the airport has been expanded to accommodate the growing traffic. The new runaway was inaugurated in 2017.

MOPA GOA Airport – 18 km from Sindhudurg. It is an upcoming airport that is being developed in North of Goa. Once operational it will help tackle the connectivity challenges that tourist especially those coming from international locations have to face. This airport will help in attracting more tourists in the area. MOPA airport will also cut down the time and be more convenient to people travelling to Goa or Sindhudurg by air.

Dabolim GOA Airport –70km distance –At present this is the only operational airport in Goa. The airport is jointly operated by Indian Navy and Airports Authority of India. Since the commercial operations are being shared, it usually leads to a lot of congestion on the airport. While it is a small airport but it offers all the features one would expect of an international airport.

Sindudurg is easy to reach even by the sea route. Port at Redi is located along the Konkan Coast in VengurlaTaluka of Sindhudurg district, Maharashtra (15045’ N latitude and 73039’ E longitude). The proposed site lies 85 km north of Goa and 150 km south of Ratnagiri.

Sindhudurg is truly the land of opportunity. There are so many new and interesting options that are coming to the area and things are expected to become even better once things settle down and more people get vaccinated. For people looking to start something of their own, it is a good time to invest in the area. Axis Lake City Plaza is the perfect place situated in Sindhudurg to start a business venture. The upcoming commercial complex is everything that the millennial can hope for. Not only will it have the best shopping experience but a fantastic food court to indulge in. 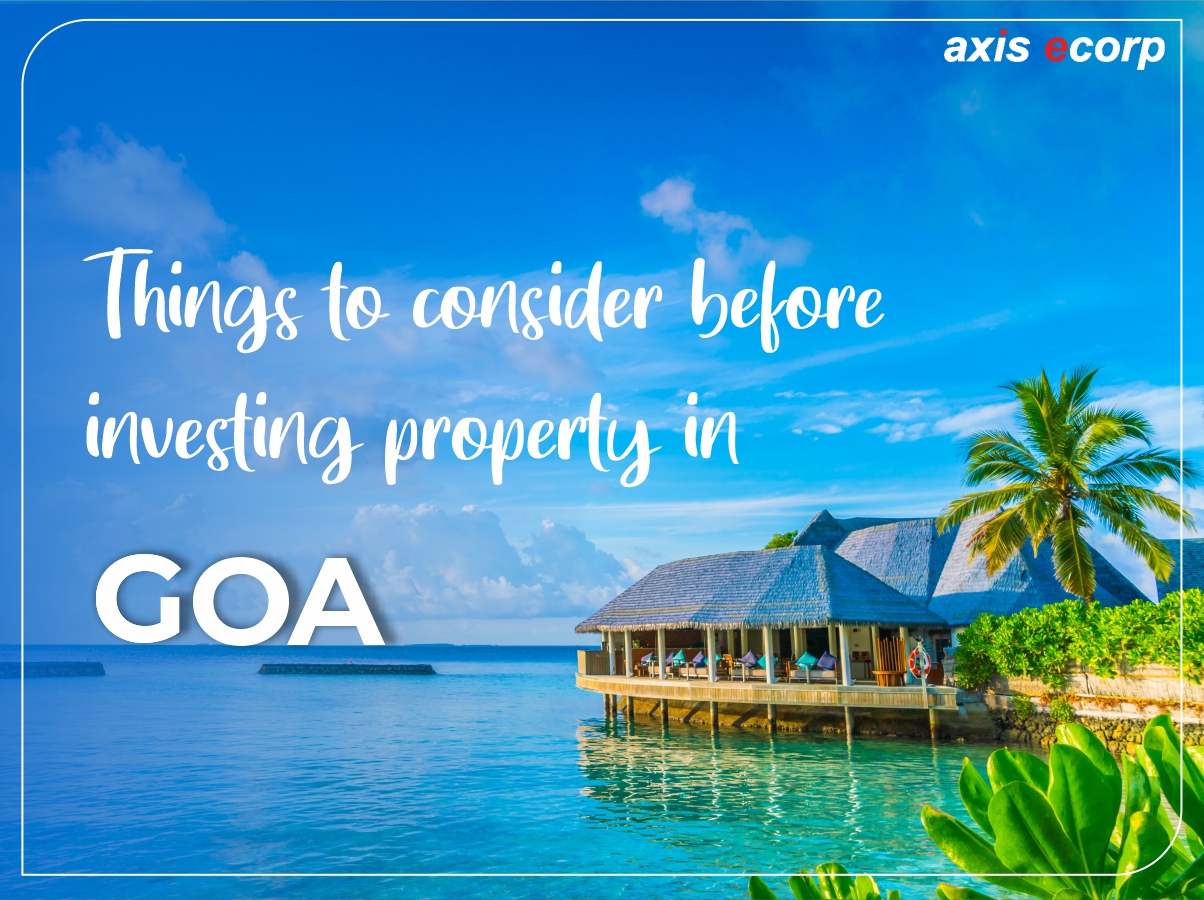 Things to consider before investing property in Goa 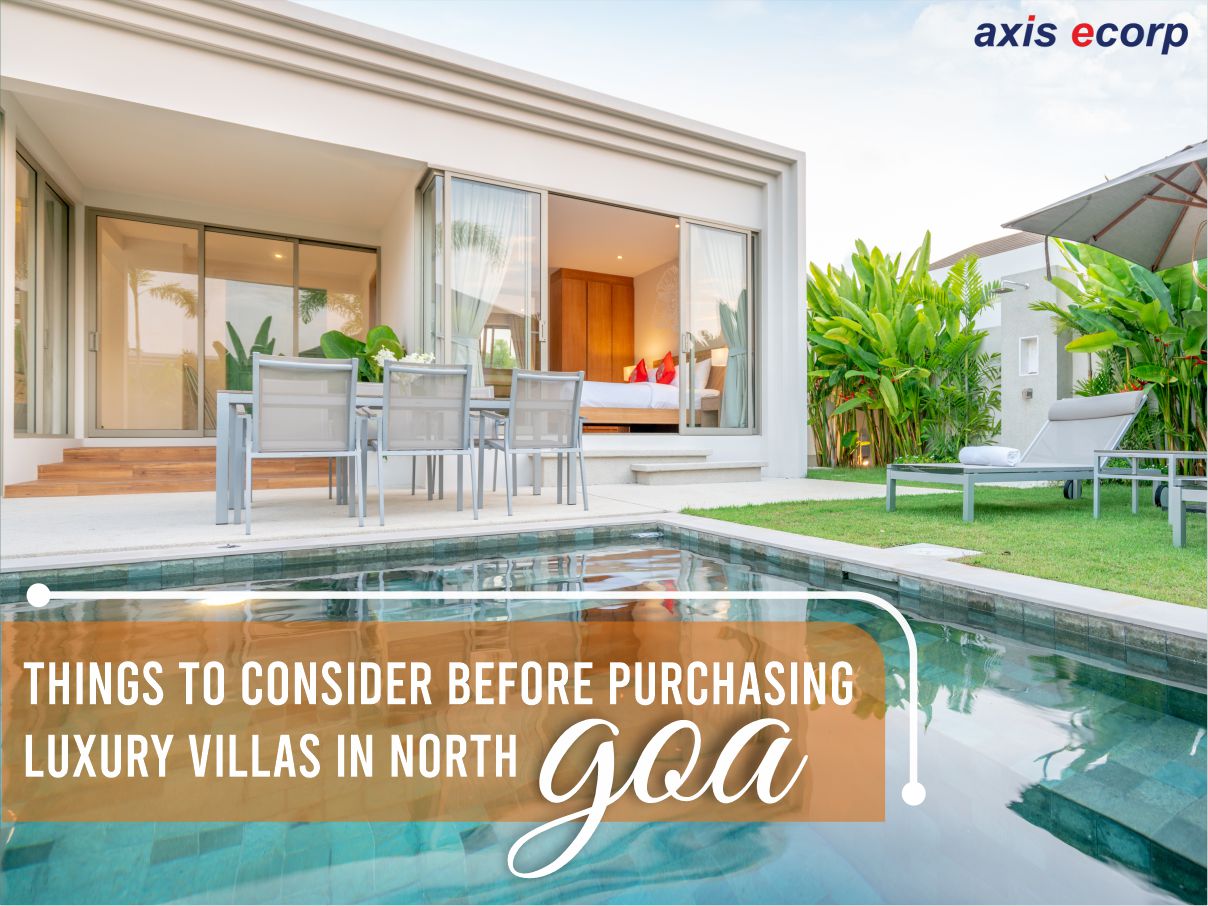 Things to consider before purchasing luxury villas in North Goa 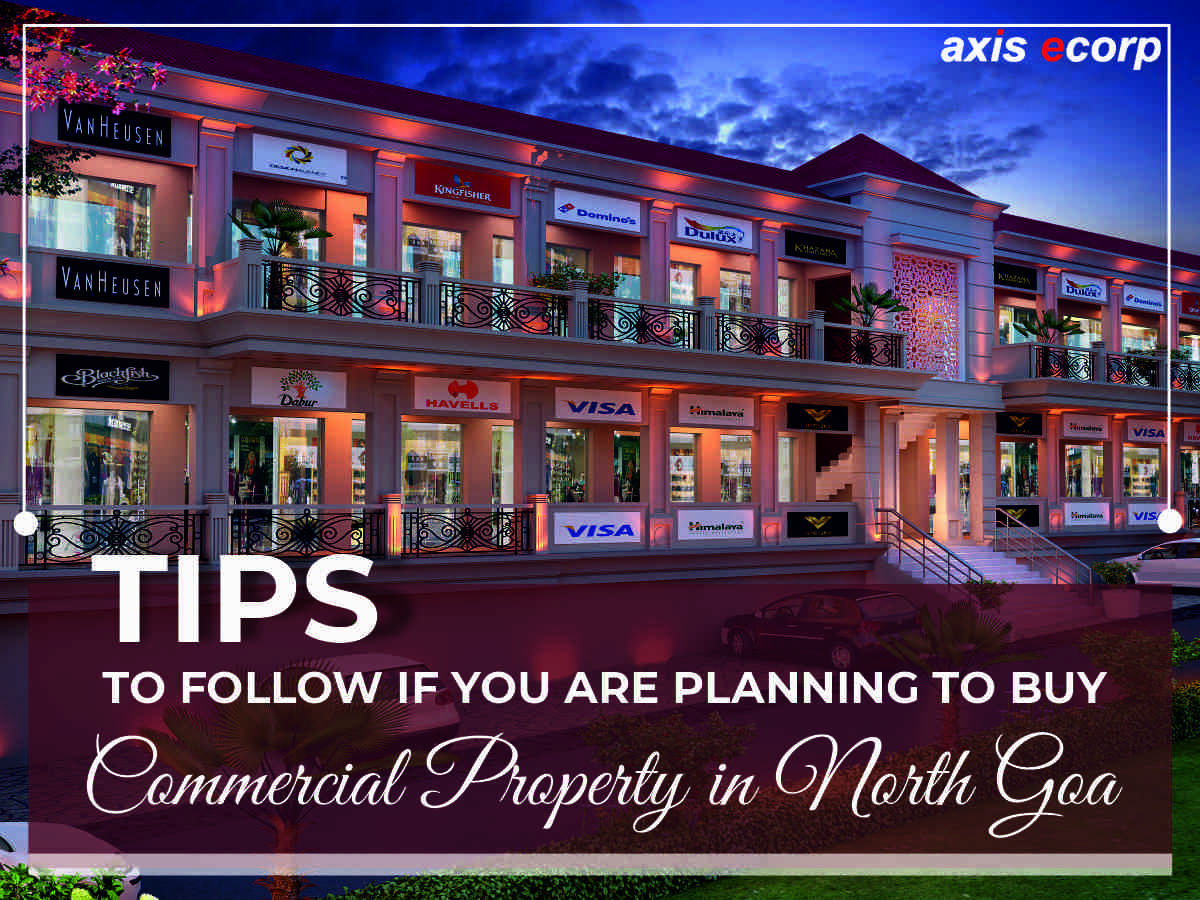