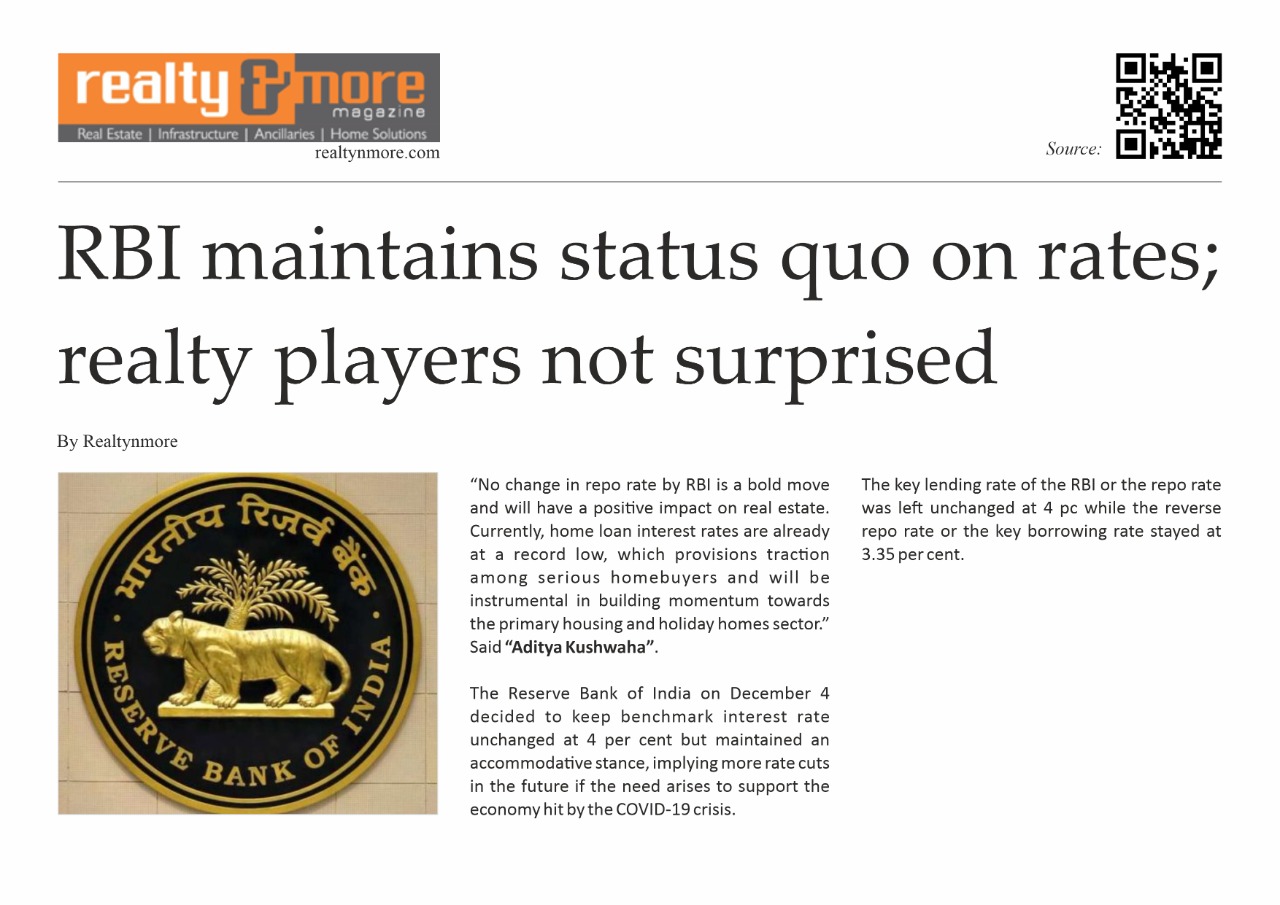 The Reserve Bank of India on December 4 decided to keep benchmark interest rate unchanged at 4 per cent but maintained an accommodative stance, implying more rate cuts in the future if the need arises to support the economy hit by the COVID-19 crisis.

The key lending rate of the RBI or the repo rate was left unchanged at 4 pc while the reverse repo rate or the key borrowing rate stayed at 3.35 per cent.

Calling the decision on expected lines, Anshuman Magazine, Chairman & CEO,  CBRE India, South East Asia, Middle East & Africa, said, “In the wake of Covid-19, Q2 of FY21 witnessed a strong improvement in consumption and therefore RBI maintaining the status quo for the third time in a row is a positive step in keeping inflation under control.”

Anurag Mathur, CEO, Savills India, was of the view that with the RBI keeping the lending benchmark lending rates unchanged, home loan interest rates are likely to stay at an all-time low and complement the other recent measures announced by the Government, especially in the last stimulus package. “Maintaining an accommodative stance is significant as it emphasizesSurendra Hiranandani, CMD, House of Hiranandani

the central bank’s focus on spurring demand which remains the highest economic concern at the moment”, he said.

The following are the reactions of other major stakeholders of the real estate industry:

“The RBI’s decision of keeping the repo rate unchanged was on expected lines owing to the rise in inflation in recent months. Even though the apex bank has kept rates unchanged, we still believe that there is room for financial institutions to cut down on their lending rates. Now the entire focus would be on how the Government plans to combat the economic slowdown and boost demand.”

”The monetary policy committee’s decision to keep key rates unchanged was on expected lines and may continue in the near future to support growth as private consumption has slowly started and several stalled projects have been revived due to the Government’s efforts.”

The RBI move to maintain the status quo on policy rates was expected in the face of persistently high retail inflation and an already record low repo rate of 4 percent. Even as signs of recovery appear in Asia’s third-largest economy, the RBI has said that it would be open to cutting rates if the economy needs support, which is a very positive signal for the future.

“The affordable housing segment is already enjoying the increased demand and the latest unchanged stance of the RBI will not have much impact on the demand per se. In fact, the growth projections of the RBI will instill positive sentiment in the market, which will translate into good numbers for the real estate sector too.”

“The RBI’s accommodative stance to keep the repo rate unchanged is in line with what most of us in the industry were expecting. The governing agencies need to contain near-term financial risks in the face of rising inflation. CPI has reached 6.8 pc in Q3 FY 20, which is an alarming sign. In Q4 although it is expected to ease out to 5.8 pc, it is still not a healthy number. However green shoots are visible in the overall economy substantiated by resilient rural consumption and uptick in urban demand.”

“The onus to lend continuous support lies entirely on banks’ quick disbursal of funds. Home loan interest rates are at their lowest, which has already shown a positive impact during the festive months in the residential segment. The upcoming quarter is likely to witness more of it and register a positive curve.”

“The apex bank has also gone beyond the usual changes and introduced notable policy changes over the past few months, aiding both buyers and developers. This has brought a certain extent of vibrancy in the market, post the stillness in the market that lasted almost a quarter. The flexibility to cut rates if the economy needs support indicates a positive signal for the future.”

“Real estate sales have improved, especially after home loan interest, and it will further improve if other states reduce stamp duty after the announcements made by Maharashtra, Karnataka, and Madhya Pradesh. The sector will benefit a lot as the demand is already high and reduction in stamp duty will provide a further boost.”

“We are happy that the RBI is optimistic about the GDP growth. The foremost beneficiary of such a positive outlook in real estate would be the retail segment as it depends on consumer spending and business expansions. The demand for office spaces and commercial places is already witnessing a significant jump, and people are coming out to spend in malls.”

“For the commercial segment, we were expecting that the RBI would come up with specific announcements that could boost investment. However, we understand the status quo stance as there was limited possibility of changing the repo rate below 4 percent.”

“The Government and the central bank have taken multiple steps in the last few months. If quick implementation takes place, then many problems will get resolved. One such announcement was the loan restructuring that will help stuck projects bringing in more projects in the market. The apex bank has shown a positive outlook for GDP growth in the coming quarters, and this would definitely have a healthy impact on the real estate sector too.”

“Though we understand the stance taken by the RBI, we still feel that real estate sector needed announcements that could have an immediate impact on delivery and sales. Now, the need is that RBI should ensure that the past announcement should get implemented in earnest. The sector has yet to see the major impact of those announcements. We hope the individual banks will take necessary steps and keep the real estate sector in their priority lending list.”

“We were following the various reports, and were ready for the status quo of the RBI. We feel that the sector, which contributes towards the economic growth of the country, should get special attention. The RBI should ensure that banks extend lending support to the sector.”

“No change in repo rate by RBI is a bold move and will have a positive impact on real estate. Currently, home loan interest rates are already at a record low, which provisions traction among serious homebuyers and will be instrumental in building momentum towards the primary housing and holiday homes sector.” 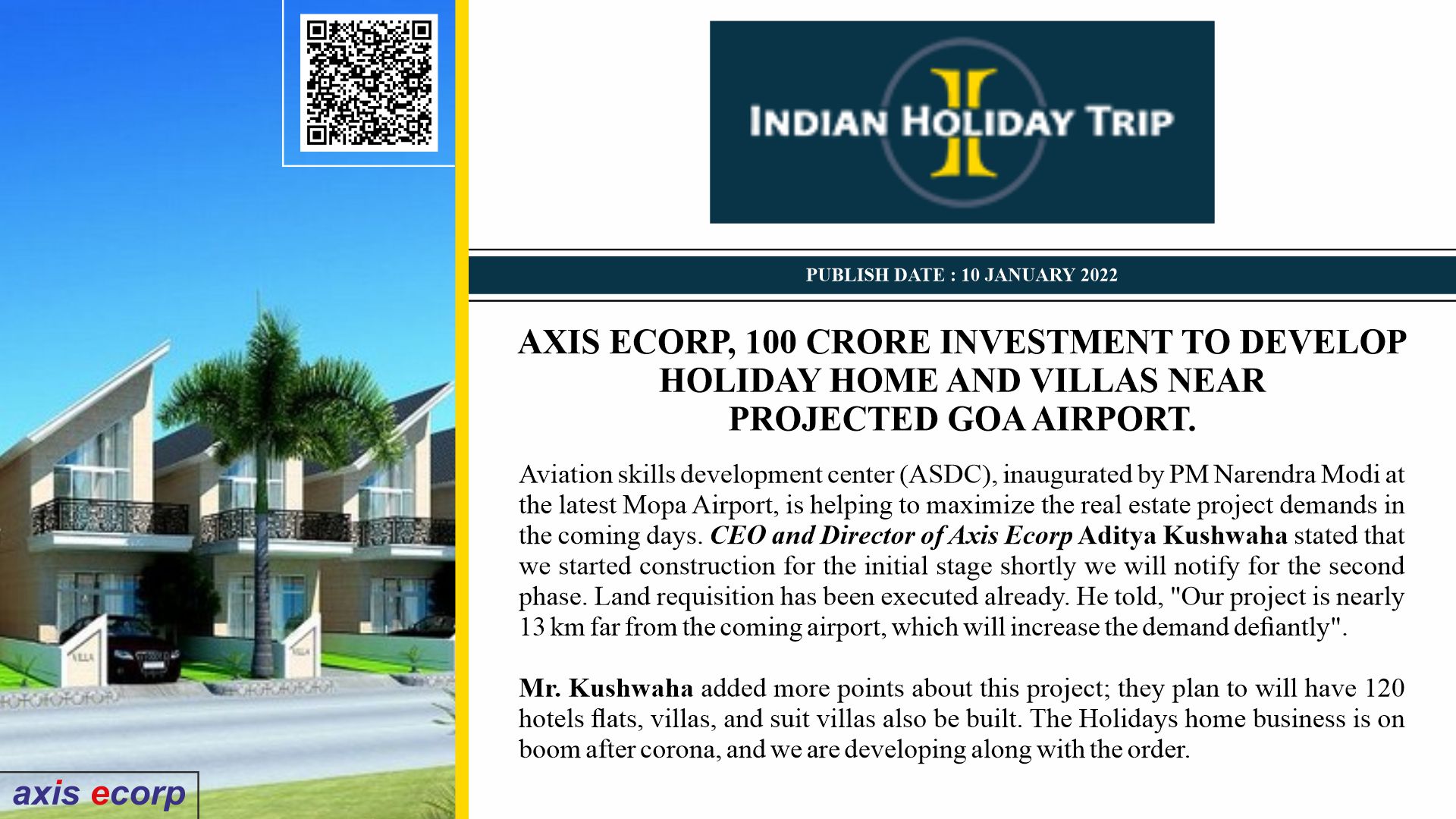 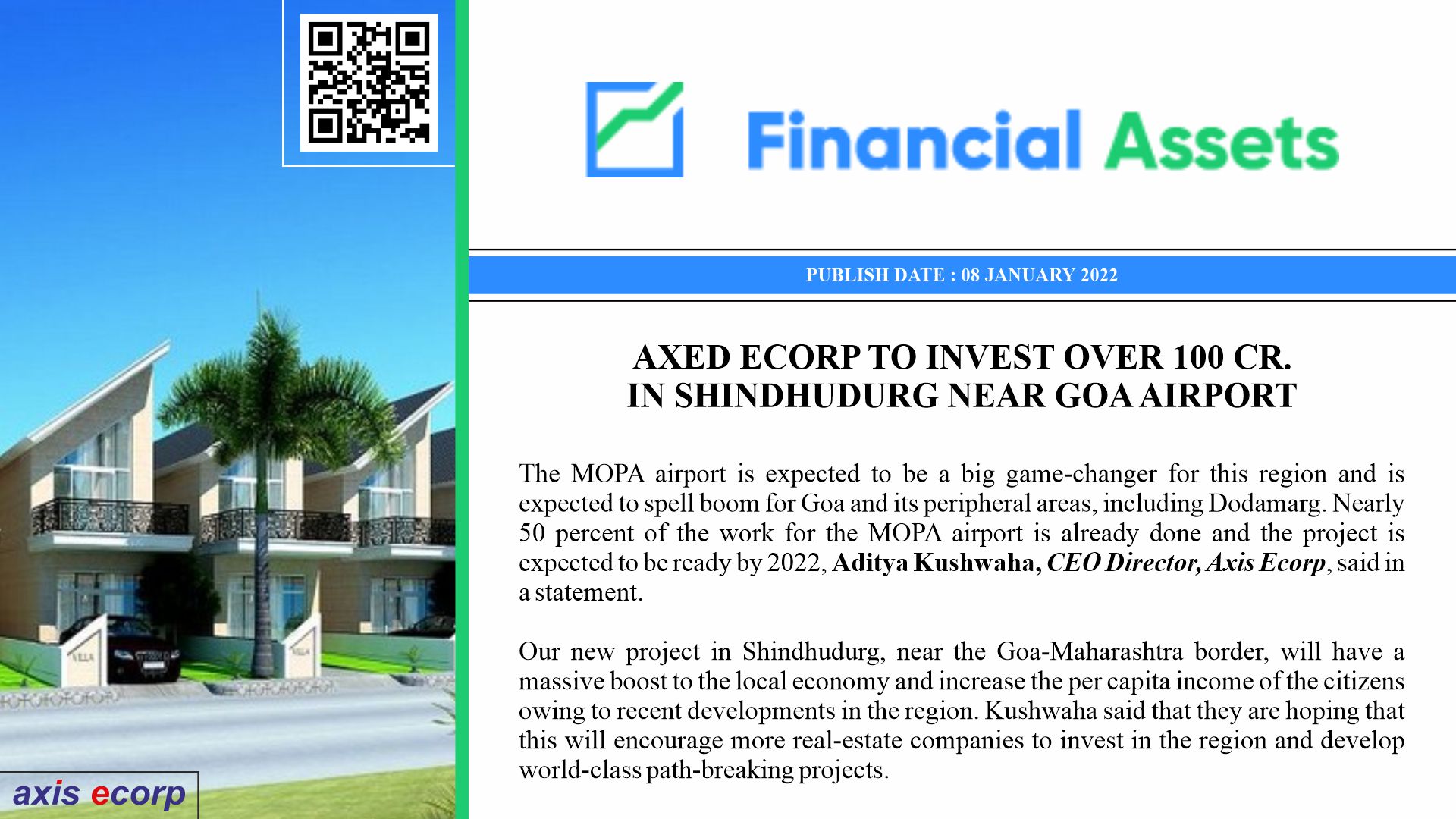 Axed Ecorp to invest over 100 cr. in Shindhudurg near Goa airport 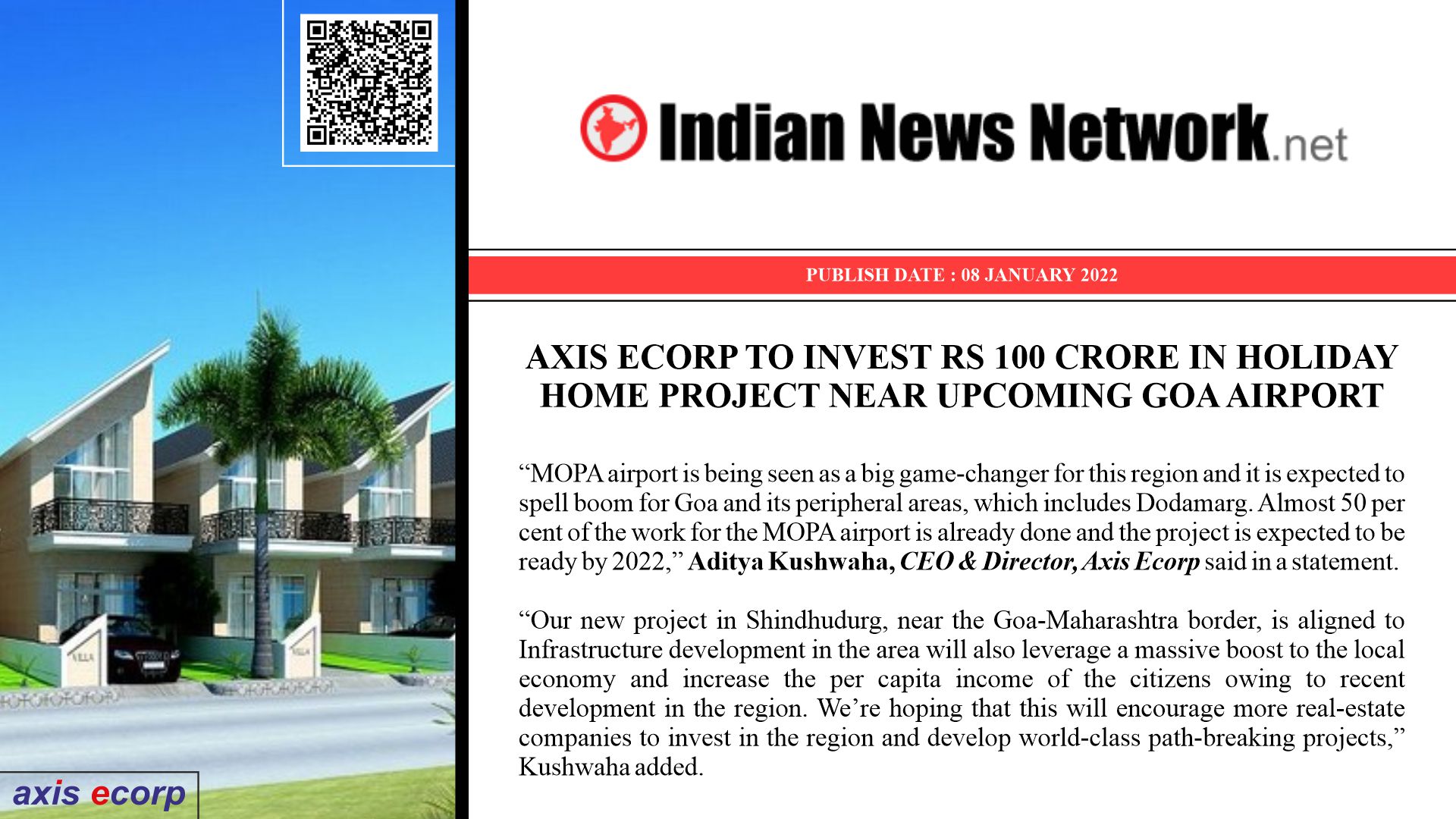